I was browsing /lgbt/ one day around the 30th of September and came across the below image posted, kind of a strange thing to be on that board so I read into it, what follows is a what I originally thought to be a silly Netflix advertisement with a bit of cryptography that turns out to be something deeper and more complex. Since there’s a fairly large amount to this I’ll be brief.

The postcard, a few interesting things off the bat, the long number having some characters of Pi and the domain

http://bluerose.network/posts/internal-note This page stood out since it wasn’t in the same sort of style of Twin Peaks related stuff; experiment1 dot p n g is at the top of the post.

http://bluerose.network/experiment1.png resolves to a png with this text in the corner:

Considering qcckiui is the same length as network I thought about doing some kind of plaintext attack, but given we’re literally told a key is involved my mind instantly jumps to a vigenere cipher (which funnily enough is the same one my blog uses).

Going to that site I’m greeted by three different cans of sweetcorn, ok… Maybe the source has something?

Sweet, firstly, according to the Twin Peaks wiki garmonbozia is some kind of paste stuff, anyway, theres some ciphertext that’s probably some ROT since the spaces are kept in place.

The first domain was actually down for a few days when I initially tried it but it worked later. “The Arm” is some character in Twin Peaks and 1010am is another reference to some guy called Philip Jeffries, this will be useful later on.

All garmonbozia combined? I thought about something to do with steganography but the next part of the sentence quells that.

The combination of the sweetcorn cans? addition only? Strange, not sure.

…combined, include the woodsmans number

After a bit of thinking I thought it maybe had to do something with the different sizes, different resolutions of the images? Adding up the resolutions:

Trying out http://black-lodge.network/4520/ results in a page with another Twin Peaks reference, and image of some room from the show. Again more stuff behind the source.

My intial thoughts are base64 since it kinda has that vibe to it (I encode all my files in their base64 equivalent so I’ve seen it a lot).

Following my instinct turned out correct:

You wish to speak with joudy? You wish to know bob? These tasks are not difficult. Future tasks are difficult. joudy-and-bob.network, the directory is the number upon the postal card, appended to the last name of me. my name + number.

Joudy is another person from Twin Peaks,

the directory is the number upon the postal card, appended to the last name of me. my name + number.

The number on the postcard, I guess the big one: 3141123581314159 The last name of me? This whole time all the source code comments have been written from the 1st person, “I joined them in February 16th, 1989”, “I have seen them use the others”, and the ciphered part “1010am i finally left”, we can go out and say the person writing this is Phillip Jeffries.

The three people listed are reddit users who also solved this back when I was also solving it.

The person of interest is LilBeanBear.

LilBeanBear has been in several threads along with the other people on that list, he didn’t seem to contribute much and only mentioned at the end of a thread that some random guy messaged him saying some odd things.

A few days later, he posted this thread: https://www.reddit.com/r/ARG/comments/dea7j7/arg_or_real_world_creepy_stuff_saphire_calypso/

He links the following screenshots which show a person going by the same of SAPHIRE CALYPSO detailing how they created the Twin Peaks ARG. 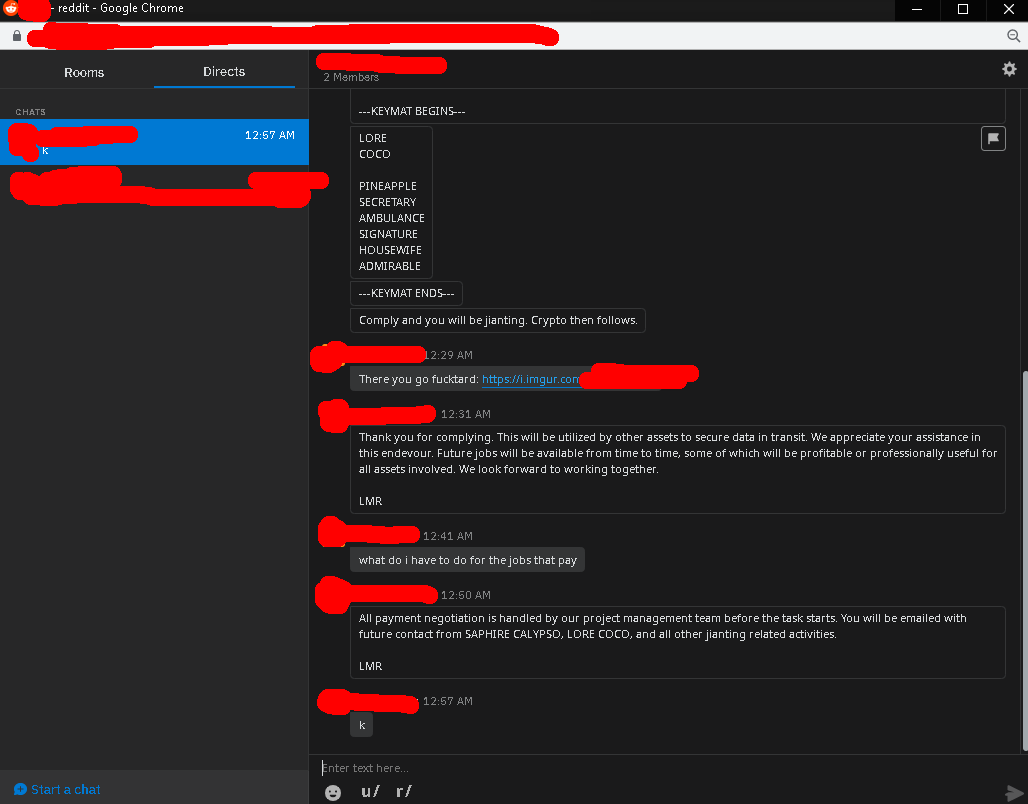 I’ve seen a few of these things before, but this guy especially reeks of someone trying to feed a narrative, OP is part of the ARG. There’s just something about his typing style, trying way too hard to act like he wants no part, yet simulatanously giving us all screenshots and commentary on what’s been happening.

All of that infomation about him being blackmailed with his name/address/etc isn’t verifiable by anyone but OP, so why should we trust that he isn’t part of it? Personally I feel like a legitimate group whose gone out of their way to create an elaborate ARG/something more and has your doxx, you wouldn’t be making reddit posts telling them to “suck it”.

SC (Saphire Calypso) reveals that we are welcome to join the final round (implying there were earlier ones) called LORECOCO which starts on the 13OCT19 and ends on 31OCT19.

joudy-and-bob.network also notes these as the dates in which:

The combined key will unlock the gate.

The gate will open for those who have ventured through the black-lodge and eaten the garmonbozia.

There’s also this piece of text which I’m unsure of.

A few days after seeing this reddit, the joudy-and-bob.network was updated with a piece of obfuscated javascript, I haven’t gotten around to analysing it yet, but it prints You are searching. You have found. rc4. A natural curve to a longest extent. 666 times. rc4 a reference to the rc4 cipher maybe?

Apparently this kind of thing has happened 3 times before, each similar in style, cryptography/programming related.

I’m fairly sure Round 1 begins with the below image, which was posted on the Something Awful forums on July 23rd 2019. (It’s also linked on imgur https://imgur.com/gallery/EEAE7YG by user saphirecalypso)

The Hangul translates to:

The link directs to a Github repo, I can use the commit history to see the original README when this was posted.

The image speaks of ‘7 steps’, so I guess this means there are 7 rounds of challenges.

The string of characters appears to be base64 because of the padding characters at the end, but converting it results in garbage: W s40g[s juXSD

There are 4 other files in this repository, POTATOES, MEAT, CARROTS and VITAMIX.

POTATOES is a private key for something called EC, ellptical curve cryptography. I’m not sure what these keys are for though.
Here’s a mirror: https://ftp.cass.si/==QNwADO5k.plain

MEAT is equally as confusing:

VITAMIX is instantly recogniseable to me, my ftp service encodes images as a base64 blob, using a converter yields the following image. 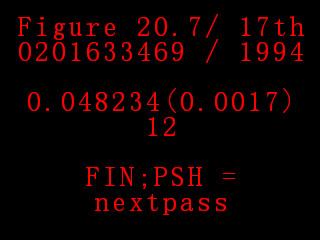 I think this is the end of round 1 since the README states that we are given a head start, yet others will have to wait until the 1st of August.

A day later the README was updated with a link to https://www.youtube.com/embed/0tEaiyv5Ow0 and some hidden text.

The video has some interesting captions. https://ftp.cass.si/==QN2czMwA.png

On July 22, https://youtu.be/fr-SlQr-jv4 was uploaded (linked from https://imgur.com/gallery/FaHGYGX), I can tell from the sounds that there’s some kind of data hidden in the audio - steganography.

There’s a form of audio steganography called SSTV (slow-scan television) which sounds very similar to the audio in this video, using Robot36 I was able to extract this image.

Key material (keymat) looks like those weird words in all caps, there was a few in that previous youtube video and the imgur:

a is a quote from Do Androids Dream of Electric Sleep (good book) by Philip K. Dick. b is a quote from The Book of Law, b is actually split from two quotes which can be found at http://www.thelema101.com/liber-al.

Both M and N are 13 digit codes, considering ISBNs have been used before and are 13 digits it would be wise to say those are the probable values.

This leads me on to the comments next to M and N, I thought they were just more keymats, but I think they’re actually placed there such that we get the correct ISBNs.

By pure chance I found this amazon page: https://www.amazon.com/Book-Law-Aleister-Crowley/dp/0877283346 and to my surprise the publisher is Weiser books! Published in 1987 also.

The root of that domain is a site for some water distribution thingy, but all the links go to redcross, I noticed in the bottom left of the page there’s an upside down question mark that links to: http://purplewaterbottle.com/rainbowkitten/lander.php

Chat contains nothing but a few <br>s.

Crypto is quite something, it lists and EC key and RSA private key, linked: https://ftp.cass.si/==wMyAjMwA.plain

Files is interesting, it gives us an AES KEY;

It also says: Density has no impact on skillset. Working together is important.

In july the following was posted by saphirecalypso.

FVEY and APT39 are the Five Eyes and and Iranian Cyber Espionage Group, strange.

The chinese translates to:

On the 24th of June https://ftp.cass.si/0gDMyADMwA.png was posted in imgur by SC. Clearly some ROT text, the transcription:

The words in caps seem to be more keymats…

The numbers are lat/longs for some location, probably referring to the geocaches mentioned in chocolateWonder.msf.

The first location is at ‘Schleiders Ditch’. The second one is at ‘The Ditch at 40’. The third one isn’t at a ditch related place, but there is a building called ‘Ditch Witch’, so that fits the pattern.

Stangers and watchers, no one found the egg.

Earlier today (10/10/19) I was messaged on reddit by saphirecalypso, I can’t reveal all because that “may result in your preclusion from future activities related to “SAPHIRE CALYPSO”, “LORE COCO”, and Jianting”, so I guess I have to be somewhat hush hush.

tl;dr: They liked this page, warned me of “enumerating other members” & they said they were interested in my markov bot, that I’ll be contact in 24 hours to be involved in LORE COCO and that researching some stuff would be useful to me in the future… they also said I should learn an entire language (lol) either Persian/Mandarin.

Also, I found out that LMR stands for ‘labour-management relations’.

I’ve been thinking that CARROTS and MEAT are possibly PGP/EC encrypted messages, we’re given the EC/RSA private keys on that purplebottle.com but the passphrase is unknown.

I’ve been doing some research on elliptical curve cryptography and how it’s used, ECC doesn’t have any specific tools for directly encrypting/decrypting data, instead users use a Diffie-Hellman key change to create a shared secret and then communicate using that, this is known as ECDH.

When https://github.com/saphirecalypso/F2D64AD97033074E was created, a string (V7LlqwnpEHM0ydD0MGfhv1sXc5UgG2p1kcz5iljuU0Q=) was added to the README, alongside two EC private keys in POTATOES, I believe this string to be the shared secret between these and the other files, MEAT and CARROTS are potentially encrypted messages using these keys.

Apparently openssl is quite particular about how the keys are ordered, a straight copy paste from the file results in:

Instead I had to format it to strictly 64 characters per line, with the ---- BEGIN EC KEY etc.. on a new line, and the file ending on a new line.

We can extract the public keys from both private keys with OpenSSL. http://purplewaterbottle.com/rainbowkitten/Crypto/crypto.php mentions EC-Prime256v1 as the curve.

Maybe the shared secret is what’s meant as the ‘combined key’ that unlocks the gate on 13/10/19? Pure speculation at this point.

At this point I’m unsure of what to do, there’s no real hints, just a collection of random characters that don’t really have any meaning or connection that isn’t simply created out of my own desperation to potentially fit some pieces together. Suffering from an extreme lack of information, not aided by the fact there there’s 22 threads on that phpBB forum that I still don’t have access to.